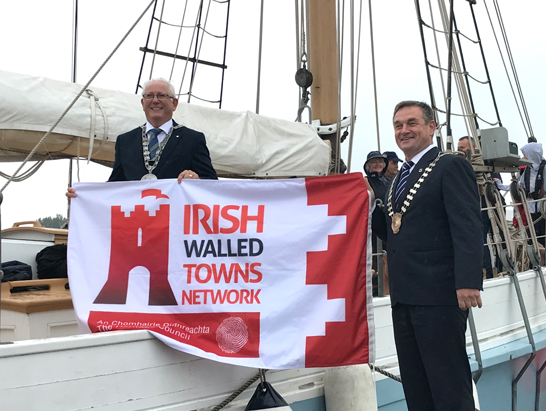 The Ilen and its crew are continuing their voyages between the IWTN coastal towns. In August they delivered an IWTN flag to Waterford from Galway, their last IWTN port of call. From there, they travelled up the River Barrow to the inland port of New Ross –with Councillor Joe Kelly (Mayor of Waterford City and County) and Eamonn McEneaney (Director of Waterford Treasures ) on board – to exchange flags there. Despite the dampening weather in New Ross, the sight of the Ilen making her way towards the marina raised the spirits of those waiting for her.

It was wonderful to see the Ilen sail up the Barrow with the IWTN flag flying high, helping to celebrate the coastal walled towns and their shared maritime and trading connections. After the exchange, the flag was raised outside the Dunbrody Famine Ship Visitor Centre and, after lunch, Wexford County Councillors took the opportunity to join the return journey downriver to Waterford. The flag will later be moved to a new flagpole at Goat Hill. 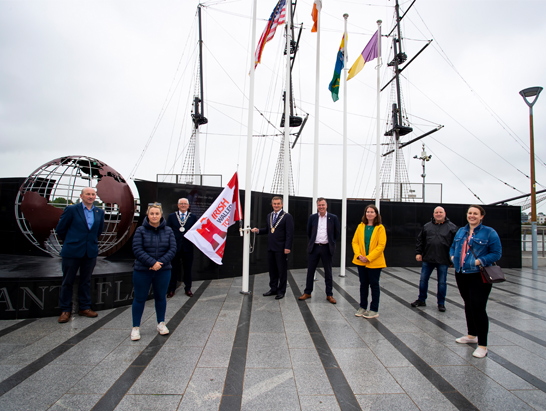 The Ilen is returning home to Limerick now, but the project which will see them facilitating flag exchanges, highlighting historical trade links between our coastal towns and forging new links between the modern communities will continue into next year.

You can see the short film of the event here. To find out more about the Ilen Marine School and what they do, you can visit their website here.